Can you distinguish frugal from cheap? | Money Journey Today
Skip to content

Can you distinguish frugal from cheap?

Personal Finance Blog » Can you distinguish frugal from cheap?

How do you distinguish frugal from cheap?

Saving money has always been a major concern among people trying to be financially responsible.

Adopting a minimalist and frugal lifestyle can only be beneficial if you’re looking to spend less and save more.

However, there’s a fine line between being meticulous with finances and being downright stingy.

Do you know where you stand? Are you frugal or are you cheap?

Personally, I admit there I’ve managed to fall victim of the darkside quite a few times. Paying debt while being unemployed was tricky, so there were plenty of times I chose the cheap way around. (I don’t anymore, so you can keep reading).

The problem with being cheap, however, is it can affect others.

So where do you draw the line between being cheap or frugal?

Being cheap vs. being frugal 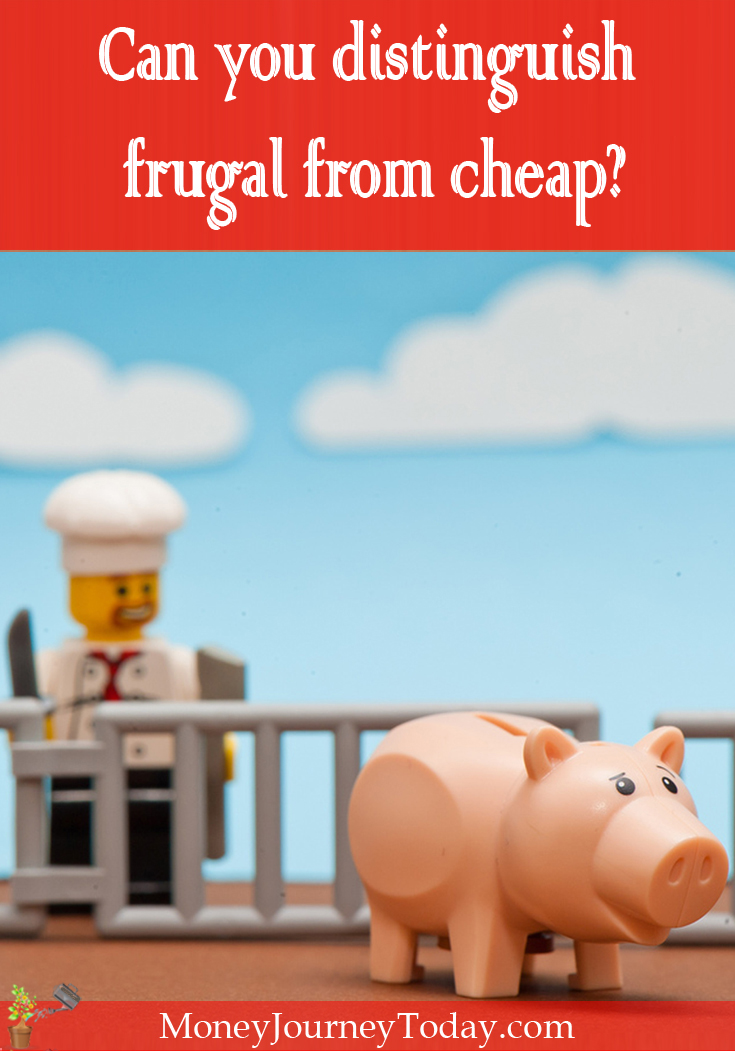 Back when debt was a priority, I admit I would have rather bought 9 cans of really cheap tuna fish, instead of one pack of smoked salmon.

When money is tight, often times we think about how can we get more of something’s that cheap. It lasts longer so you spend less money, right?

However, the quality of a product should definitely be taken into consideration when making a purchase.

Sure, you could buy more toilet paper for the same money you’d spend on the thicker one. But would you risk it?

Not everything that’s expensive has great value. Just as not all cheap products lack quality.

However, cheap people tend to look at the price tag, rather than the value the purchase may offer.

Think about whether or not it’s wiser to buy one $30 T-Shirt you’ll still wear after 10 years, or one $3 T-shirt you’d have to throw away after few weeks.

Unfortunately, few years ago I didn’t take the value aspect into consideration. I managed to get rid of dozens of clothes I bought for cheap. Somehow I’ve actually managed to lose money. Oops!

But clothes aren’t the issue here.

One cheap person and one frugal person walk into an appliance store.

The cheap person looks for the cheapest fridge they need for their new home.

The frugal person, on the other hand, compares energy efficiency levels, reads online reviews before even entering the store and maybe consults friends and family before making a purchase.

The frugal person will probably end up paying more for the new fridge they need.

The cheap person will be thrilled they found a bargain! Ha! But wait, who gets stuck with a higher electric bill from now on? And what if the fridge stops working? What if it isn’t big enough and they’ll end up wasting food?

Related article: How to live well below your means

Intimate relationships as well as friendships can suffer because of someone’s refusal to spend money.

While frugal people do put savings above all else, they probably know not to offend friends by purposely refusing to go out, if that means spending a few bucks on a drink!

Often times, being stingy can make you downright grumpy.

“Ugh, going out again? Great, another chance to throw money out the window!”

What about not leaving a tip after a romantic dinner at a restaurant? Or refusing to go out at all, just so you’ll “save money”?

I admit to having suggested alternatives to spend less on meals, but have never pulled a Scrooge McDuck on a waiter!

There’s a difference between being attentive with how much you spend and being too stingy.

Being cheap can potentially damage your health

Saving money on water or saving on your electricity bill is just common sense. Everyone adopting a frugal lifestyle is probably looking for ways to spend less on utilities around the house.

Others though, in their attempt to save money, are actually doing more harm than good.

Turning off the lights if you’re not in a room makes sense. Keeping them turned off when you read or, say, fold laundry, isn’t a good idea for your eyes.

Making sure you avoid food waste by cooking those veggies you bought 3 days ago is wise. Eating a banana that’s been standing on your kitchen counter for the past 3 weeks definitely isn’t!

When being cheap meets potential damage to your health, that’s definitely a red flag you’re way too close to that thin line!

Related article: 10 ways to budget money on a low income

Stinginess can be.. unusual

Few years ago, when the recession was at it’s peak, I remember reading an article online on how to save money.

People were losing their jobs, I was having a hard time finding one myself, the situation back then was anything but rainbows and unicorns.

Naturally, in order to ‘survive’, many found inventive ways to save money and posted them online to try and help others.

One piece of advice that stuck with me to this day went something like this:  save money on toilet paper by using one sheet at a time.

Over the years, I’ve also heard of many other ridiculous ways to save money:

Related article: 5 extremely cheapskate things I wouldn’t do to save money

As you probably noticed, it isn’t all that difficult to distinguish cheap from frugal. At least in some cases.

Where do you stand on the verge of cheap vs. frugal?

Have you ever chosen to be cheap in order to avoid spending money?

Latest posts by Adriana (see all)

Article posted in Save Money

12 thoughts on “Can you distinguish frugal from cheap?”